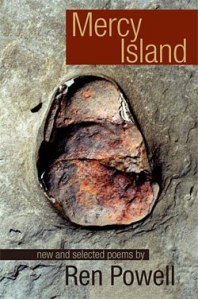 “These forty-one poems, written by Ren Powell between 1998 and 2010, depict a coming of age that begins in a claustrophobic American trailer park and expands into the kind of borderless existence shared by all emigrants and homesick travelers.

Throughout this journey, the poet’s fears–which are the fears we all harbor – are balanced by her unflinching witness to what is real, just, true, and beautiful. Even in the face of pain and disintegration, the poet refuses to relinquish her humor and her humanity.”

Other Books Available in/from Norway: If you are having trouble ordering through the Norwegian website, please send me an email and I can arrange purchase through PayPal.

The Elephants Have Been Singing All Along. (2017)
by Ren Powell. Wigestrand forlag (Press). Norway

Available in bilingual edition (translations by Eirik Lodén), in hardback: Wigestrand. As an electronic book: ebok.no.
(If you are having trouble ordering through the Norwegian website, please send me an email and I can arrange purchase through PayPal. We are currently researching the possibility to send e-books through US and UK distribution channels.)

Review excerpt: Translated from the Norwegian.

Powell has set a difficult goal: to translate the processes that happen with us and within us: the wordless, bodily sentences we know well–in one way. In another way, they are unconscious experiences, and if conscious, certainly not put into words. Powell writes about what provides our small cells with energy, and about the sections of chromosomes that are important in the cessation of cell division, while she also succeeds in viewing the body as an entire landscape.

[…] She writes beautifully, sensually and intellectually on this subject, and she exploits many references and allusions, as when she turns the Zen koan. In this way the poetry is often also meta poetry. She writes about the forming of meanings and narratives as an overriding principle. […] She delves into what communicates with us and within us, and comes to the conclusion that the spaces between are also significant. As well as “the spaces between the spaces between”. Unknown worlds open themselves to us in her poems. And as [Eirik] Lodèn points out in his masterfully written afterward, these poems are both sophisticated and spontaneous, both demanding and obvious. […] Powell comes closer to the poetry’s roots and source here, and her writing is intense.  […] This is a rich, beautiful and challenging work, that succeeds in its impossible goal, and that encompasses both human cells and cathedrals.

The imaginative autobiography in poems formed the basis of Ren Powell’s PhD thesis at Lancaster University. Powell’s meticulous research was drawn from published and unpublished documents by historians and psychologists, as well as D.L.D.’s own letters, memorials and books. The poetry collection utilizes free verse, found poems and traditional verse forms such as the villanelle, sonnet, sestina and the English madsong. It also explores the expression of bipolar disorder through poetry.

“”With this, her fifth poetic volume, Powell has reached new maturity and new depth and has produced an innovative and sensitive tribute to an extraordinary woman.”

: “…as the title suggests, there is an expansion of the interpretation of ‘intimate’ .While the poet’s concern for animals and nature is evident, the book also focuses concretely on persecuted writers and rebellions against authority […] However, Ren Powell is no way a political slogan poet. These poems introduce us to the wondrous within our own lives. There is a varied use of language and the wide range of themes and poetic forms— but we are always brought back to the vulnerable and exposed aspects of human beings and nature. […] Perhaps what is most impressive is Ren Powell’s certain hand as she ventures far beyond the familiar when it comes to associations and images, to create remarkable, beautiful lines of verse, the likes of which are seldom seen.”

With uncompromisingly direct language and powerful imagery, her work comes from a vision similar to that of Flannery O’Connor or Cormac McCarthy: powerful images of a truth that slips aside just as one turns to view it straight on.”

A collection of light verse about pregnancy and birth.
Several of the poems were put to music by the Lena Skjerdal Trio.

Letters to The World is the first anthology of its kind—a feminist collaboration born from The Discussion of Women’s Poetry Listserv (Wom-po), a vibrant,
inclusive electronic community founded in 1997 by Annie Finch. Letters to The World is a remarkable example of how the Internet has radically rearranged associations among poets, editors, and readers.