My ex came by last night to drop off the old lady. She made her perfunctory tour of the house, while I went back to the couch with a glass of wine, to finish up Gregory Orr’s book Poetry as Survival. But then she jumped up with surprising energy, and leaned into me, her forehead on my neck. Puppy hug. So I put the book down to give her attention. Both hands on her body. She’s remarkably thin now. When I run my hands along her ribs and can feel the odd pillows of fluid. Some sort of tumors. The knot in the teat is the cancer.

Her paws are still ticklish.

I hit a good spot on her back and her hind leg starts running in place. I stop and she nudges me to begin again. And I do. I spoil her rotten these days. Liverpostei and soup bones. I wonder what joys she has now. I don’t think her sense of smell is what it used to be. Her hearing is nearly gone. Last week two dogs tied up in their yard were barking at her. They weren’t two meters behind her, but she lifted her head, gazed into the distance as though she heard something faint, like a train coming. Then she went on her way. Clueless. She seems happy still, though.

Petting her last night, I was thinking how unique a relationship with a dog is. How she arrives as a puppy, then gets ahead of me somehow: my baby, my elder. I won’t have her much longer. Yesterday in the morning, while I was writing and she was still in Stavanger, I thought I heard her breathing in the next room. She’s haunting me already.

I’m not really sure why I’m writing to you about this. I suppose because we talk about ageing. About coming to terms with our own mortality. Maybe this is why we need animals in our lives: to teach us?

I laughed out loud when you wrote that you’d miss your daughter, and she would “dreadfully miss the cat”. Sometimes I think we focus on what we are emotionally prepared to handle, I guess. Maybe the cat is teaching her, preparing her to miss you properly.  When I read that bit of your letter, I also  thought about when I was a teenager, my mother told me that she “practiced” for own mother’s death. I’m going to stop short of a psychoanalysis of my mother and her ability to disconnect, or what I inadvertently learned from her – but there you have it, I guess, the connection of your letter to my old lady’s cancerous teats.

You wrote: “I’m glad that our children are strong enough to make their own ways in this difficult world.”

Yes. But it makes me want to get another puppy. One who will grow, and age, and still come to me – leaning her forehead into my neck for comfort – no matter how old she is. Selfish of me.

I know it’s best to give in to the reality, and find joy in that.

This morning I was listening to a podcast while walking the old lady around the block. Oddly enough (or not) Roger Housden was talking about Ben Saunders, the Arctic/Antarctic explorer. Apparently Saunders had described a moment on one of his journeys when he stopped fighting the wind and the cold; when he gave in to the reality of it and felt (not warm, but) a sudden rush of joy.

While I have not crossed the Antarctic – or even braved a bit of  it the way you have – I have stood on the top of a mountain above 14,000 feet in biting wind, and experienced that kind of acceptance. And the joy. People say, “suck it up,  and get on with it”. But that’s not it. “Bit i det” they say in Norwegian, but that’s not it either. Both of those images involve a kind of bracing, not a relaxing.

The prayer goes: Accept the things we cannot change. I’ve always though of acceptance as a synonym for resignation. Now I think it’s something else entirely: something related to appreciation. 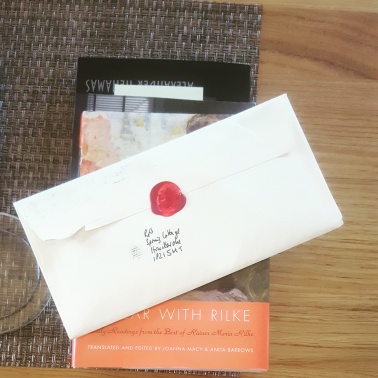 No decent segue here, but on the practical matter of publications you asked about.

There seems to be something in the air. The Nobel Prize going to Dylan, the general rise of populism. The kulturråd hasn’t purchased poetry this year. Which I find stunning. At any rate, my publisher may lose money on me for the first time (not that he has ever made money on me). He is taking a huge risk. So is my translator.

“My translator”. That sounds ridiculously proprietary.

The fact is, Lodén is finishing up his own collection this year – to be published in 2017. I’m happy for him. It’s been a long time since he published his own original work, and I’m looking forward to reading it. The thing is, he should continue now to focus on his own work (which is high brow , and therefore also likely reliant on kultrurråd). One book a year. That is generally the risk a publisher can take on a writer. My books have been purchased because the translations are new “Norwegian” works of literary merit. The Council defines “Norwegian” in terms of language, not citizenship. I owe Lodén everything.

I think his essay about my “late style” is the harbinger of the end of an era. It has me a little freaked out.

I was listening to On Being the other day. A very inspiring interview with Michael Longley. At the end of the recording, Tippet thanks the publishers for permission to read his poems on air. The absurdity struck me: that we as writers strive to give up our rights to our own work. I mean, that is the goal, isn’t it? To effectively sell our work to someone who will distribute it and make more money than we will. And we say, yes, but it isn’t about the money. No. It’s not. So, it’s about the distribution? Not these days. It’s about the prestige.

I really want not to care.

Whitman self-published. Dickison gave poems away with gingerbread. To worry about publication is putting the cart in front of the horse, anyway. I think I need to stop worrying about being a writer, and just keep writing.

Come to think of it, maybe I didn’t need a segue. Maybe it all circles back to acceptance.

I have several projects that I have been working on. It’s been difficult to focus this year, and I find if I talk about projects, I seem to lose momentum.

But I do miss bookbinding – so there’s that.

Crap. I shouldn’t have talked about that.

Meanwhile. I have some translations to do for Nils Christian –  poems for another festival he is attending. Yep. Handmaiden to other people’s genius. Keeps me humble.

I hope your writing day is good! That the Ice Child is coming along. You know, I’ve been wondering if your head is in a very different place when you write different genres. If it is a Jekyll and Hyde kind of thing – or if it all comes down to editing.

And I was also thinking that my favourite novelist is Jim Crace. No two books alike. Although I am not sure he ever wrote erotica.

Looking forward to another letter.

Much love to you and M.!

This is one of a series of weekly open letters to friends – friends who write back to me on their own blogs. Please click through.  Category: Correspondence.

If you’d like to catch up, read the letters in chronological order here.